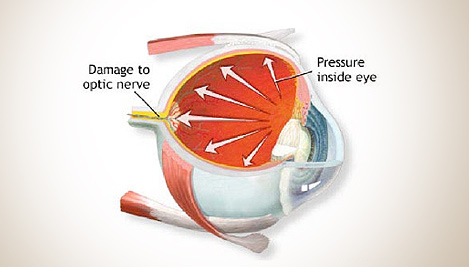 Glaucoma is an eye condition which affects the ability of the eye to send picture to the brain interfering with a persons vision.

This can be due to the optic nerve being affected, increased eye pressures damaging the nerve or both. This damage is permanent but if detected early further damage can be minimised.

Glaucoma is painless, gradual and people often find it difficult to notice. This is because the brain automatically “fills in” gaps in the visual picture which are caused by Glaucoma. This can prevent people seeing objects or obstacles.

Only about half of the people who have Glaucoma are even aware that they have the condition. When Glaucoma develops, usually you do not have any early symptoms and the disease progresses slowly. In this way Glaucoma can steal your sight very gradually. Glaucoma can cause blindness if it is left untreated.

Fortunately, early detection and treatment (with Glaucoma eye drops, Glaucoma surgery or both) can help preserve your vision.

The main categories of Glaucoma include: 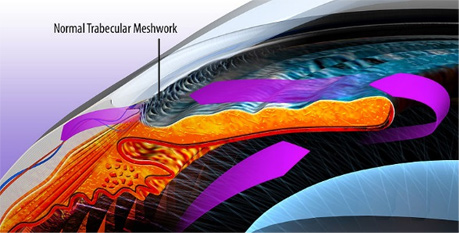 The most common form of Glaucoma is called primary open angle Glaucoma. It occurs when the trabecular meshwork of the eye gradually becomes less efficient at draining fluid. 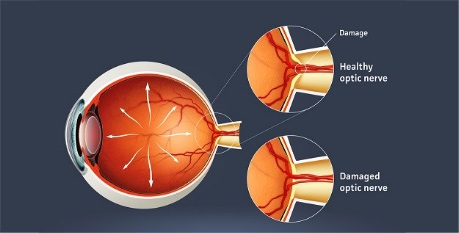 Typically open angle Glaucoma has no symptoms in its early stages and your vision remains normal. As the optic nerve becomes more damaged blank spots begin to appear in your field of vision. You usually will not notice these blank spots in your day to day activities until the optic nerve is significantly damaged and these spots become large. If all the optic nerve fibres die, blindness results. 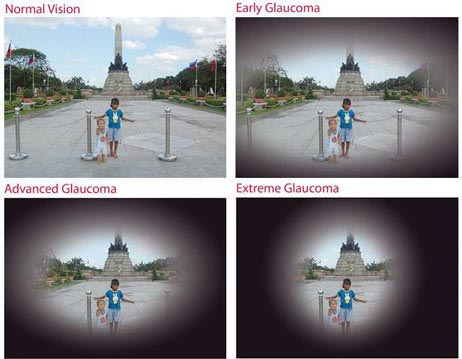 If the drainage angle becomes completely blocked eye pressure rises quickly resulting in a closed angle Glaucoma attack. Symptoms of an attack include:

Risk factors for Glaucoma include:

Below is a list of tests that may be performed:-

This procedure measures the pressure in your eye.  During this exam, your eyes are numbed with eye drops.  Mr. Golchin uses an instrument called a tonometer to measure eye pressure.  The instrument measures how your cornea resists to pressure.

Your optic nerve is inspecte

d for signs of damage using an ophthalmoscope, an instrument that magnifies the interior of the eye. Your pupils will be dilated (widened) with eye drops to allow a better view of your optic nerve to see if it is has been damaged.

The visual field test will check for blank spots in your vision, another sign of Glaucoma.  The test is performed using a bowl shaped instrument called perimeter.  When taking the test, a patch is temporarily placed on

one of your eyes so that only one eye is tested at a time.  You will be seated and asked to look straight ahead at a target. The computer makes a noise and random points of light will flash around the bowl shaped periemter and you will be asked to press a button whenever you see a light. Not every noise is followed by a flash of light.

With OCT, your ophthalmologist can see each of the retina’s

distinctive layers. This allows your ophthalmologist to map and measure their thickness. These measurements help with diagnosis and treatment guidance for glaucoma. It can also be used to detect other retinal diseases such as ARMD (Age Related Macular Degeneration) and Diabetic Eye Disease.

Because the thickness of the cornea can affect eye pressure readings, pachymetry is used to measure corneal thickness.  A probe called a pachymeter is gently placed on the cornea to measure its thickness.

There is no cure for Glaucoma but treatments are available which can help stop the progression of the disease.

How your Glaucoma is treated will depend on your specific type of Glaucoma, the severity of your disease and how it responds to treatment.

Medicated eyedrops are the most common way to treat glaucoma. These medications lower your eye pressure.

These eyedrops must be taken regularly every day as prescribed by Mr. Golchin. Never change or stop taking your medications without talking with your doctor. 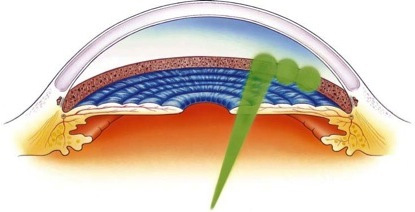 Laser surgery has become increasingly popular as an alternative method of treating pressure. Selective Laser Trabeculoplasty (SLT) is a relatively new laser treatment for open angle glaucoma. SLT uses short pulses of low energy laser light to target melanin containing cells in a network of tiny channels, called the trabecular meshwork. The objective of the procedure is to help fluids drain out of the eye, reducing intraocular pressure that can cause damage to the optic nerve and loss of vision.

The selective technique is much less traumatic to the eye than Argon Laser Trabeculoplasty (ALT), which has been the standard laser procedure. ALT can cause tissue destruction and scarring of healthy cells in the trabecular meshwork structure. SLT reduces intraocular pressure without this risk. SLT can be used to effectively treat some patients who could not benefit from ALT. This includes patients who have already been treated with ALT.

SLT can be given as first line treatment or as a complimentary treatment for patients already on Glaucoma drops.

Laser procedure is not a permanent solution and the effects can wear off. Up to 50% of patients have positive still maintain good control of the pressure for five years afterwards. However, if the pressure rises SLT can be repeated. Some people may need to continue using Glaucoma drops.

Medical and laser treatment can control the pressure in the vast majority of patients with Glaucoma however, a few people may require surgical treatment such as trabeculectomy or aqueous shunt surgery. 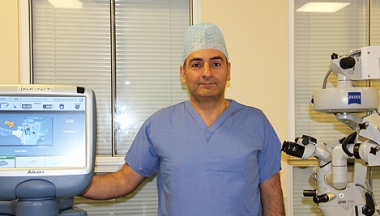 Mr. Golchin and his team are wonderful, efficient, very professional and always helpful and kind. I was very nervous about having cataract surgery- I needed both eyes operated on and had them done two months apart. Everyone at the Bon Secours Hospital in Cork was reassuring and caring. Mr. Golchin came and spoke to me before each operation and was very understanding. The procedure itself was really straight forward. I can't believe the difference the operations have made to my sight, which is now really clear and sharp- it's like having my young eyes back again! A huge thank you to Mr. Golchin and his staff, I feel very lucky to have such excellent eye care.